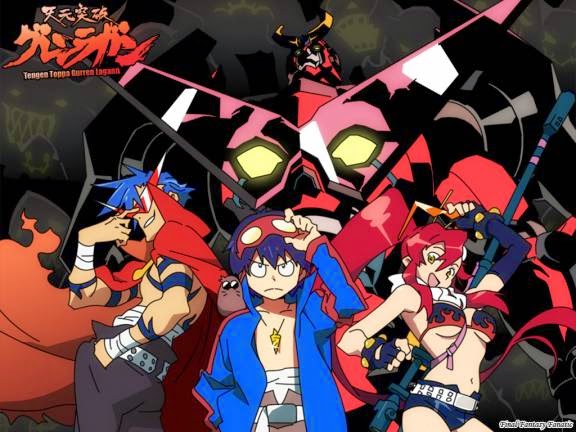 OVERVIEW: Gurren Lagann was a Japanese mecha anime that originally aired from April 1, 2007 to September 30, 2007. The show is set in a dystopian future where humans have been forced underground by man-animal hybrids called Beastmen.

The Beastmen pilot giant fighting robots called Gunmen too powerful for normal weapons to destroy, until a young digger named Simon and his "big bro" Kamina discover a smaller robot of their own deep underground.

They excavate the robot and, alongside a surface-dwelling sharpshooter named Yoko, they make their way to the surface and declare war on the Beastmen so that humanity can once again roam free. They get another Gunmen and fuse it with the smaller robot to create Gurren Lagann, the strongest Gunmen the world has ever seen.

REVIEW: Going into this show, I didn't really have high expectations. I didn't think it would be bad, but the set up seemed like your typical mecha/adventure anime fare: kid gets a hold of a giant robot, fights other giant robots, wins through the power of friendship, yada yada yada. I've seen before, I'll see it again.

But as the show went on I began to realize that it wasn't trying to be taken too seriously, or even really do something different. The creators just wanted to make giant robots fight, and they did so with really impressive visuals that could be even awe-inspiring at times.

And even though I've seen the characters before (Kamina's the arrogant hothead with an ego as big as his heart, Simon's the younger brother figure who's not confident in himself but slowly gains courage with the help of his role model, and Yoko's the voice of reason that doubles as the sex appeal and love interest), I found myself growing really fond of them. Sure, they're a little stereotypical, but they embrace their stereotypes and end up standing out because of it.

But then the show blows your mind with a dark plot twist. I won't spoil it, but something terrible happens within the first third of the show's 27 episode run that completely changes the course of the series, as well as the overall vibe. What had been a light-hearted mecha anime suddenly becomes this dark and deep allegory for dealing with loss.

The sudden change of pace really surprised me, and at first I thought I didn't like the show anymore. But I soon realized that it wasn't that the show was bad; it was that something I had really cared about had been taken away. The rest of the series reminds you of that loss nearly every episode, and while it does return to the ridiculous and awesome robot fights, there still hangs this weight over the show that actually makes you care about what's happening. The show took a risk; it started off silly and action-packed, then tried to get taken seriously. And it worked. The show remained a ton of fun, but now everything that happened held meaning. It wasn't just about giant robots anymore; it was about people using giant robots to fight for a cause they believed in, and all the pain and suffering they had to endure along the way.

It was a surprising twist, and it took the show in a direction that made it totally unique. It took the best of the serious and the silly to create something wonderful, something that will make you laugh, cry, and yell in excitement. In the end, Gurren Lagann is an ambitious and well executed anime. If you're not a big fan of mecha anime, I'd still give it a watch for the emotional impact and charming characters. And if you love giant fighting robots like I do, then there's plenty of stuff here for you to enjoy. The best word I can think to describe it is epic.

AGE RATING: I think the rating for this one is about appropriate. There can be times when the show gets violent, and the sexual content is about what you'd expect of an anime of this rating: gratuitous boobage and overly-sexualized postioning, but no actual sex or nudity.

If this kind of stuff bothers you, then keep it away from younger teenagers. Otherwise, I'd say 14 is just the right age for kids to be seeing this.

VERDICT: The show ends with a time skip in the final episode: the final battle is fought, and the characters are shown going about their lives several years later. I'd be lying if I said I'm totally happy with how the show ended, but the creators kind of cut off the characters' stories where they needed to.

That said, I'd be willing to see a sequel or spinoff series with new characters; the ending is open enough to have new characters or even side characters take front and center, and the time skip leaves a lot of room for other stories about how the characters met their respective fates. If there isn't any followup, the show stands fine on its own, but I think there's still some room left for extra material.