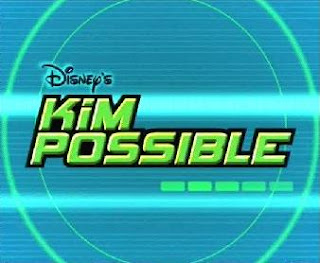 OVERVIEW: Kim Possible is an animated series that aired on Disney Channel from June 7, 2002 to September 7, 2007. The show is centered around title character Kim Possible, a teenage girl who fights crime. She's assisted by her best friend/sidekick Ron Stoppable, a goofy klutz who mostly serves as comedy relief, and Rufus, Ron's pet naked mole rat.

Kim's adventures lead the team across the world and pit them against a variety of enemies, most notably Dr. Drakken, a mad scientist trying to take over the world, and Drakken's snarky assistant Shego.

Kim and team frequently save the world from ridiculous plots, all while going to high school and dealing with typical teenage problems.

REVIEW: This show does a really good job of simultaneously parodying and paying homage to the super-spy genre. The over-the-top plots allow for ludicrous circumstances that let the comedy come naturally, while still allowing for impressively animated action and even some genuine drama.

The teenage dilemmas,while a bit cliched, never feel too forced and usually result in a decent lesson for kids. Unlike most shows that do the whole hero/teen angle, Kim Possible allows it's eponymic character to be acknowledged by her peers. That is, Kim Possible doesn't have a secret identity: she's just Kim Possible, and everyone who knows her knows what she does. This makes for an interesting angle where everyone knows what she does, but aside from people she helps directly, she doesn't receive much extra attention. For the most part, nobody really freaks out that somebody who frequently stops world dominating madmen is just sitting with them in their biology class.

Though a few characters are a bit stereotypical, most of them hold up fairly well. Kim's a competitive perfectionist who's also a big goody-goody, while Ron's the goofball slacker who, while generally good-hearted, is easily influenced and has to constantly learn a lesson, which sets up the plot for several episodes. Their relationship is odd yet believable, with Kim keeping Ron out of trouble and Ron keeping Kim from over-stressing.

Drakken and Shego are particularly great: Drakken is an egotistical maniac who constantly fails, while Shego, who is considerably more competent, constantly mocks him with no regard to his position as her boss. The two have some of the funniest moments in the series, and their relationship gains complexity from the hard to explain bond between them that keeps Shego from just leaving Drakken or Drakken from just firing Shego.

This show is genuinely funny and the comedy still holds up a decade later. A lot of this comes from the good chemistry between the characters, and the rest comes from pretty genius joke writing. I found myself laughing out loud not at individual jokes but entire episodes just because of how well-done the comedy is. There are, of course, a few jokes that fall flat, but they're extremely rare and the good jokes more than make up for them. 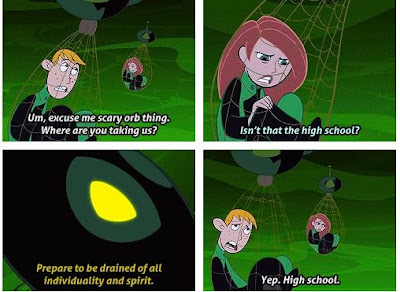 The only real problem I have with this series is its mixed relationship with stereotypes. For example, it's great to have a show with a strong female lead and lots of strong female characters, but it's kind of upsetting that every female in the show, except those played for laughs, have the body type of a Barbie Doll. Or how Kim is strong and smart but is constantly worried about getting a boyfriend. It's like for every ten progressive thoughts the show sponsors, there is one narrow-minded or poorly executed thought that makes the show seem cliched. In addition, sometimes messages that are supposed to be progressive and open-minded just seem forced. There are a handful of episodes where characters disregard Kim because she's "just a girl" and she has to prove herself. These are fortunately few and far between, but it bothers me that the show feels it needs to go out of its way to have "girl power" episodes. The characters, especially the female ones, are strong and well-written already; they don't need to force the idea that these characters are cool.

That being said, I don't think the show really encourages any kind of negative behavior or mindsets, at least not intentionally. Younger viewers that might be more easily influenced can still watch it safely, and probably be better off for it.

Overall, Kim Possible manages to be incredibly funny and tell a fairly engaging story while doing so. The characters hold up well and provide lots of laughs, and although there are a few morally confused concepts presented, they are few and far outnumbered by good lessons and good morals, making this show fun for all ages.

AGE RATING: As I've said, this show is OK for viewers of any age. That said, the show can be pretty action heavy, and a lot of the high school drama will only be relatable to kids around that age. I'd say anybody over the age of 10 or 11 can enjoy this show fully.

VERDICT: Similar to Danny Phantom, this show had a weird ending. Instead of building up the main villains and having a huge plot revolving around them, a totally new and unexpected threat (aliens... literally aliens) emerges that forces the heroes and villains to unite. Unlike Danny Phantom, the finale mostly manages to capture the spirit of show, although some characters feel a little out of character just so that they can get a "happy" ending.

This ending probably feels weird because the final season was only aired due to fan demand. The series was actually supposed to end with the TV movie "So the Drama," with Kim and Ron still in high school. However, the finale puts Kim and Ron at their graduation day, and it leaves their future pretty open to the viewer's imagination. I would say that a follow-up series would be absolutely doable: the show never lost its stride, not even in its later seasons. It was funny and engaging right up to the end, and I feel like there was still a lot to explore with the characters and the world they inhabit. A sequel series with Kim and Ron in college would probably work really well, although if the series stays dead it'll be fine as it is. There's a lot to enjoy already and I'm sure I'll go back and rewatch in the future; I just think a follow-up could be very successful.

Posted by Isaacariah at 8:23 PM